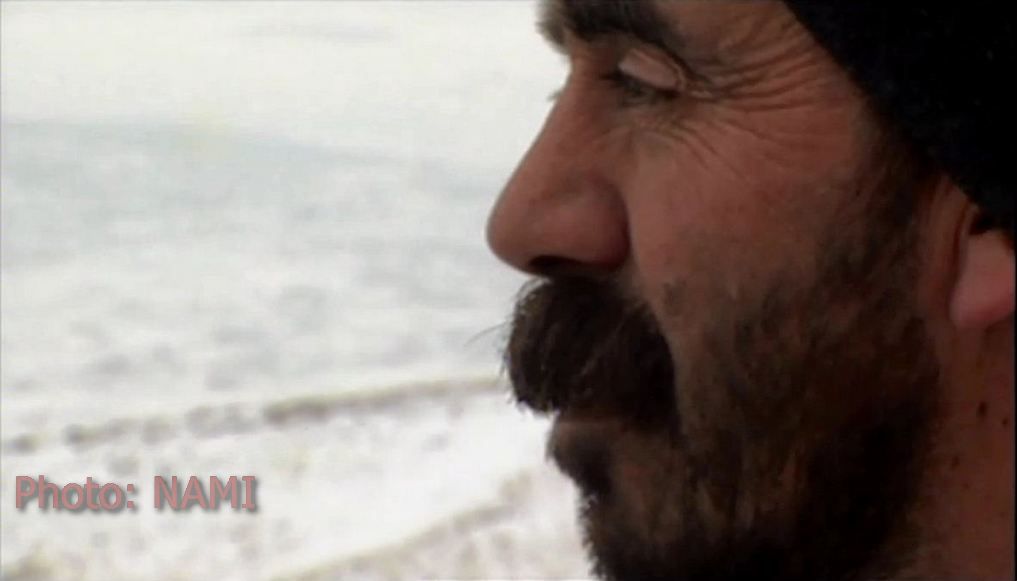 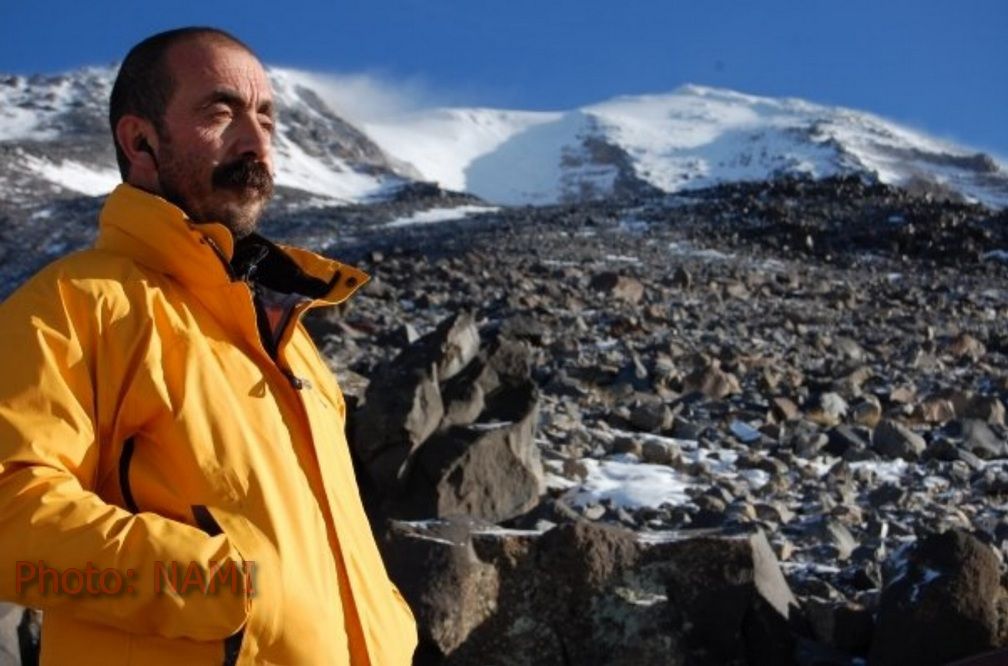 Every local villager on the mountain believes by tradition these must be the remainders of the ark of Noah as mentioned in the Bible** and the Koran. In cooperation with a Chinese group of explorers the discovery was documented in a documentary movie in October 2009. From off 25 April 2010 the news of the discovery was launched through the international news media.

Within just a few days the news of this great discovery was overshadowed by false rumours on the internet the discovery being a hoax.

Since the June 2008 discovery, several years have passed and meanwhile more than 25 eyewitnesses, amongst who are a Belgian medical doctor, several Dutch* and American Scientists have entered the structure and recorded evidence. Those that have entered the structure all mention the same; the impressiveness, prehistoric character and the ingenious ways of construction. Apart from this the many artifacts found in situ convinced the scientists of its prehistoric nature.

The structure is well preserved under a thick layer (3 – 10 meters) ice and rocks at the side of a glacier lakebed at the 4000 meter level on the mountain. Its tilted position at a most impossible and dangerous location proves the structure could never have been build on site, but must have been ended there by huge forces of nature. Its location and appearance exactly match most historic ark-eyewitness accounts.

Below an excerpt from a newsletter Ark InSight Foundation received from Philip Williams, who has entered the structure together with Sheila Bishop, a female American scientist, in November 2014.

“……Now feeling well and fully aware of my surroundings, I move into position to descend into the passage. As we make our way down and through the long snow-covered ice tunnel, I notice the passage turning toward a level floor. I loose one of my crampons along the descent. The floor now turning level, it doesn’t much matter.

Shining our flashlights to my left, I see several pieces of worked wooden boards sticking out from the floor and wall. I take off my gloves so as to operate the camera. I use my other hand as a measure. 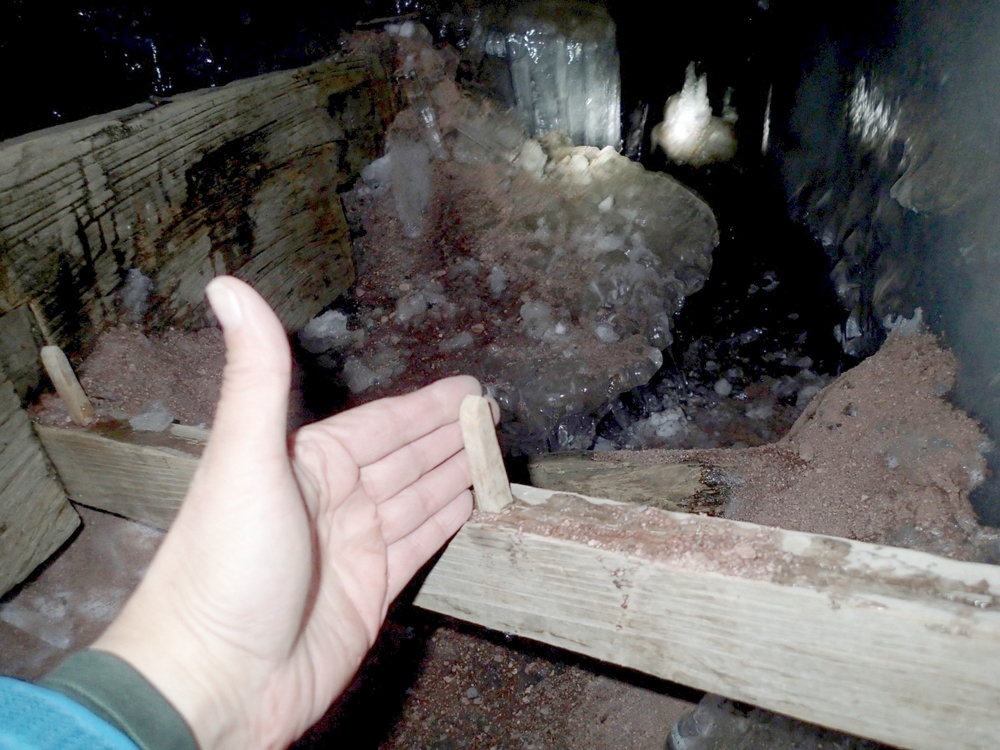 For some miles before reaching High Camp until I notice those first well-finished wooden boards, aside from what we had brought, I had seen nothing on this mountain but rocks, snow, and ice. Ahead and behind us and on every side lay a monotonous menagerie of smooth-sided broken rocks either completely or partially covered by snow and ice.

As we shine our lights further down the passage where we are walking, that scene suddenly changes. As our flashlights survey the end of the tunnel, I see a long passage between two walls that narrows towards the top. The wall to our left slants outward as it reaches the floor with worked wooden pieces sticking out here and there.

I am astonished by the very high, very straight, and very long wall to our right. Wide horizontal boards are visible behind a thick coating of ice. The wall appears bowed slightly inward as one looks towards the bottom. What seems to be a wooden floor covered with ice is remarkably level all along the passage. The walled passage extends as far as our flashlights can reach into the darkness.

“What to make of this underground cathedral!” Or might it be a giant warehouse?

Peering to my right at what appears a straight though slightly bowed hull, I say to myself: “It might also be a great ship.”

I see no evidence of nails or any metal used for fastening the boards, though it seems that the builder had to use metal tools to cut and work the boards. ….. the guides restrain me from climbing over what appears a wooden brace in front of our passage so as to head deeper along what appears a bowed wall. The translucent ice seem to reveal the blackened wall that I had noticed from the photograph of this site taken a few years ago. The entire wall is constructed of long, wide, straight horizontal boards.

We look at the edge of the floor to our left. Cracks along the wall reveal a large compartment below. The guides point to a similar compartment above our heads.

The guides tell us that we have entered the structure’s second level. I want to stay, to study, and record, but …we also have to get off the mountain while it is still light. ….

Know that two American witnesses report that: our eyes have seen, our hands have touched, our cameras have recorded a wooden structure of what appear several large floors buried under many tons of volcanic rock and ice above 4000 meters on the south side of Greater Mount Ararat. The local villagers have believed it to be Noah’s Ark since the earthquake of 1840 unveiled it. Whatever this is, it is hardly of recent fabrication. It could never have been constructed in situ at this deep and dangerous site where we visited it. It is deserving of the most serious archaeological and scientific study. “
To be continued …..